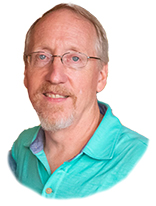 I grew up in the North Hills of Pittsburgh. Being raised in a Roman Catholic home and attending parochial school for eight years, I was exposed to stories of Jesus and the Bible. But the ritual and ceremony of the church seemed dead compared to the social revolution taking place on the streets in the mid sixties. I rejected the church and wholeheartedly joined the "tuned-in, turned-on and dropped-out generation". By my senior year in high school I was taking drugs regularly as well as searching for truth and enlightenment in ouija, seances, transcendental meditation and astral projection. Though finding power and strength in those things, I found no peace.

In an effort to avoid being drafted into combat in Vietnam, I studied theology while at college in Chicago. The college's liberal theology department taught that there were no such things as miracles, that Jesus didn't physically rise from the dead and that the Bible was an unreliable ancient manuscript to be interpreted however one chose. I concluded that religion was worthless.

Years later a couple who were newly born-again Christians began witnessing to me about Jesus, demonstrating God's love in their lives. Though cynical from my college experience, there was something real in their lives that was missing in my own. In February of 1975 after confronting an evil spirit while on an LSD trip, I surrendered my life to Jesus. Asking Jesus for forgiveness and for the Holy Spirit to enter into my life, God's marvelous grace brought redemption and instant freedom from drugs.

I began attending a Bible study at a church on the North Side and was baptized there a few months later. In 1977, I went to Bible college in Missouri where I met Krista. We began ministering in music and the Word together and were married in 1980. After three years in Albuquerque New Mexico, two years in Monroe Michigan and the births of our son and two eldest daughters, we moved to Pittsburgh, where our youngest daughter was born. God opened the door for us to teach a couple of Bible studies in our home and in 1992, Calvary Chapel began meeting on Sunday mornings in our home.

I thank Jesus for His work in me. My life is a testimony that there is no where you can go that is beyond God's love and mercy and grace. Open your heart to Him today and know the power of God in your life!